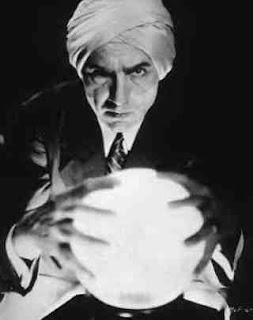 Another Haunt Trade Show has come and gone and we all came back home excited and inspired. Work has already begun on our little spooky house and I'm diving right in with floorplans, themes, rooms, costumes, set designs and promotional stuff.

Along with being part of the creative force behind our Haunt, and having a personal collection of occult related books, skulls, Dia de los Muertos paraphernalia and other dead things, I have one other unusual talent I probably haven't told yall about.

I read Tarot cards. I've been reading them for over 20 years.

When I was 17 my mother got herself a deck and we were both fascinated with them, doing readings for each other on a near daily basis. Soon afterward I read in one of my books that in order to take Tarot card reading seriously, one should have their own personal deck and treat it with great regard and respect. So I purchased my first deck, the famous Rider Waite Deck.

Over the years I have picked up another 5 decks, the most recent purchase at the above-mentioned Haunt Trade Show. One of my team alerted me to a booth for Monolith Graphics that had a Tarot deck for sale. Lucky for me they had a whole slew of them for cash-and-carry. This Gothic Tarot deck is absolutely beautiful and I was thrilled to get my own along with the compendium book. Whenever I get a new deck, I always get the compenium, read it, study it and program it in my head for future reference.

So out of my 6 decks, I have 4 that I like to use: the Rider Waite, the Alice in Wonderland deck, the Halloween deck and my most recent purchase. So whenever I do readings, I bring those 4 with me and let my 'customers' pick the deck that appeals to them the most.

Yes, I've done readings for private parties... anything from a high school fund-raiser to a corporate Christmas Party. And I've made some decent money doing it, too. I also do free readings for friends.

Now I always tell folks up front that I am NOT psychic. I don't foretell the future, I don't 'see' things and nothing I say is set in stone. Everyone is in control of their own destiny and everything in life is subject to change. Folks can simply take what I have to say as advice or pure entertainment. It doesn't hurt my feelings if people don't believe in this stuff. But I do think it takes some courage to sit down at my table and shuffle those cards.

And I've had all type of life forms sit down with me. A few years ago I was doing readings for a fund-raising event and I had two women, a mother and a daughter, sit down together at my table. They were kinda rough, loud and boisterous but I took in stride. Until one of them didn't like the 'result' of her reading and wanted another one.

I told her as politely as possible that I don't make this up. She is the one who shuffles the cards. I just lay them out in a pattern and tell her what the picture on each card means.

But no, that was NOT a good enough answer. So I gave her another reading. Once again, the 'result' was a rather negative final card.

(Normally, when I get a layout that ends up with a negative result, I remind the person of my earlier statement: nothing is set in stone, we are all in control of our own lives and if anything, take this as a warning to be on your guard. Now that you know what to look out for, hope for the best but prepare for the worst.)

Well, she was still not pleased with her reading nor my answer to the negative final card and demanded (yes, DEMANDED) a third reading, saying "I'm gonna do this until I get one I LIKE!"

No, we were stopping at 3 whether Ms. Arrogant Bitch likes it or not. I was doings readings that night for free since it was a charity event and I was NOT gonna sit there and be her personal Ms. Cleo.

So I did one more reading. Quick. Blunt. No emotion. Not rude, but not my usual pleasant self either. This time we got a positive ending and she was happy and left. But I thought to myself, "You know, you just got two negative readings in a row. If I were you I'd consider that a sign."

Needless to say, that forced me to adopt a new rule: One reading per person. No exceptions.

Besides that one rude encounter, I had another unusual situation a couple of years ago. At a 'Ghostly Sleepover' at the Mansion, I had one lady sit down for a reading. She was very quiet and somewhat shy. As I began the reading, I noticed she had a nervous twitch and kept quickly turning her head to one side.

You have no idea how hard it was to not only keep a straight face, but to remain nice, polite and not get distracted while this woman was spazzing out on me. Her twitch occurred about every 30 seconds. That was probably the toughest reading I ever had to do. But I made it to the end and she was happy with her reading.

One thing I don't do is ask a lot of questions. If people want to kept their questions or thoughts private, that's perfectly fine with me. I let them decide what or how much they want to tell me.

At one corporate event a man sat down at my table with a skeptical and dismissive attitude. He was here on his wife's request. I gave him my usual opening speech and then let him loose on the cards.

I laid them out and started describing the images and what they meant. The ones representing his 'current situation' showed things murky and unpleasant. They continued to show his unhappiness where he was in life, not getting along with someone and his desire to move on to other things. His final card showed him doing just that; leaving something behind and going on to something better.

While I was telling him all this his cocky attitude disappeared and his expression softened. At the end of the reading, he lowered the boom: He was unhappy here at this job, he didn't get along with his supervisor and was thinking about going to another job. So it was pretty obvious what his next move should be.

His demeanor totally changed. He smiled, shook my hand and thanked me, leaving my table with a pleasant and somewhat befuddled smile. I think he even mumbled a couple of "Wows."

It's impossible to not get emotionally involved in these readings. Most of the time I don't know these people but I get very sensitive to what the cards pictures tell me. I'm always worried about how someone will react when a reading has a bad turn. My most profound reading took place last November at yet another Ghostly Sleepover.

I had a man in his early 30s sit at my table and shuffle the deck. This disturbing reading started off with cards that showed something underhanded had just recently taken place. The cards had images of stealing, dirty dealings behind one's back, a loss of trust and a feeling of being hurt and betrayed.

Something very bad had just happened to this man.

The cards didn't get much better. I continued, as best I could, to relate to this poor man that the images were showing something had been taken from him or he had been lied to. The only glimmer of hope was the final card, which showed that the situation could heal if he and the guilty party came together and worked this problem out.

I looked at him sadly and told him I hoped that he and those involved in this awful mess would be able to heal this situation. He then told me his question and I nearly fell out of my chair.

He had just recently discovered his wife had had an affair with his friend. She had confessed but they were still in that early, raw period of 'oh, hell, what do we do now.' His hopes were diminishing of any kind of reconciliation. He had tried counseling but she wasn't making the effort.

Stunned, I pulled myself together and reiterated that this situation took TWO people to make things work out and for any healing to occur. He thanked me (he was pretty blown away, too) and I wished him the best as his left.

He and his wife (yes, she was there at the Sleepover, just not in the room where I was giving the reading) ending up leaving early because she started to feel ill. He was the only person I did a reading for that night. The rest of our Sleepover guests were wandering around the Mansion playing amateur Ghost Hunters.

I went downstairs and sat in the Main Hallway with my Mansion pals and proceeded to tell them what had just happened. We all sat there in some seriously stunned silence for a while. Someone eventully brought light to the situation by claiming, "Damn, Holly, you're GOOD." But no matter what, THAT reading will always stay with me.

But don't let that discourage any of you. I love doing readings and I have a new deck to play with. Just don't ask for more than one. I'll smack you.
Posted by Hollygoyle at 7:00 PM

Thanks so much for sharing.

My, you have some great stories. I have been reading cards for many years now, and up until last year I read them at our Halloween party, it got so popular that that is all I would do all night so I started a sign up sheet - it filled up immediately.

Last year the first person that signed up for a reading was a good friend of mine whos father had died earlier that week.

It was an uncomfortable reading, even if I did not know what was going on in his life....it was a negative read.

That was the first and last reading I did that night. And I am not doing it again next year. I am hiring someone to come in for the evening :)

'Bout time for an update, 'eh?