Where is Duranfan? In here. With us.

So, Halloween may be over for the masses, but for me it’s a year round thing. Hell, I still have two more weekends of Tarot Card readings at the Mansion for their Ghostly Sleepovers. And if you’ve ever seen our house, you would know I rule as Queen of Halloween, what with the gargoyles, skeletons and skulls all over the place, the various books on death, ghosts, witchcraft and other occult stuff, and the growing collection of horror films.

Love me some horror movies. I’m slowly building up my collection of old Hammer and American International movies, those wonderful classics starring Peter Cushing, Christopher Lee and Vincent Price. And I love the cheesy slasher flicks, too. If it has a silent, crazed, chainsaw wielding maniac, I’m all for it.

But for the most part, as much as I love these movies, they don’t scare me. I just don’t scare easily. Sure, if you sneak up behind me and yell “Boo!” I’ll probably jump and screech. I’m jumpy, just not easily scared.

So when other people say they can’t handle horror movies because they get too scared, I think to myself, “Huh. Lightweights.”

But honestly, out of all the scary movies I’ve seen (and we’re talking thousands) there’s only been three that freaked me out...

1. The Exorcist - I saw this for the first time ever when I was about 11 years old. Cut. I mean heavily edited for television. I could not sleep for weeks. I couldn’t handle being by myself and I nearly freaked out in the dark. It took me forever to get over it. It was several years later before I got to see the un-cut version. By then I was ‘cured.’ I’d gotten over my fear of the movie and could watch it repeatedly without losing it. The version we own now is the “Version You’ve Never Seen!,” complete with the infamous ‘spider walk.’ The Spouse and I love that scene so much we back it up and watch it 3 to 5 times before continuing on with the movie. 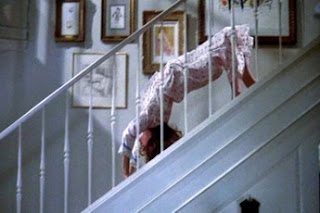 There is one aspect of the movie that does still kinda get me. It’s this face: 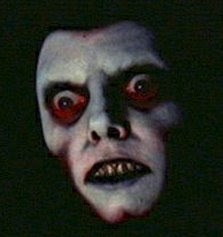 Damn. Yes, I know that’s the actress Eileen Dietz, but still. That face flashing on the screen for just a couple of frames is just whacked. I was so inspired by that face that I painted it on one entire wall of the Haunted House. 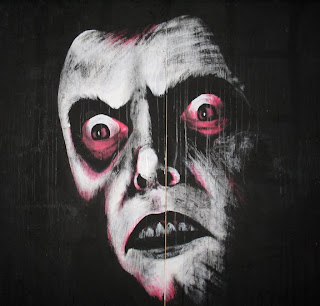 Yup, it’s still there, too.

2. Alien - This is one of those few movies I could watch every day for the rest of my life and never get tired of. I love the fact that it was written by Dan O’Bannon, the same guy who gave us “Return of the Dead” (“Braaaaaainssss!”) and that wonderfully bad sci-fi comedy, “Dark Star” (“Here boy, want your mouse? Nice mouse”). 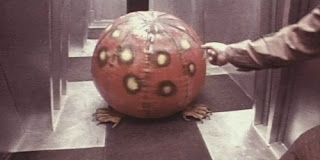 When Dark Star, his pet project with fellow film student, John Carpenter, tanked, he said, “Well, if I can’t make them laugh, I’ll make them scream instead.” I don’t know about you, but I think he did a damn good job.

I saw Alien when I 10. Even at that young age I loved scary movies. I’d been watching them since I was 5 - no shit. My first horror movie was “The Sentinel,” but more on that later.

So there I was, a horror film-lovin’ 10-year-old that nearly leapt out of my seat and screamed for my parents to “TAKE ME HOME! I DON’T WANNA SEE THIS ANYMORE!!” when the famous chest-burster scene erupted on-screen. 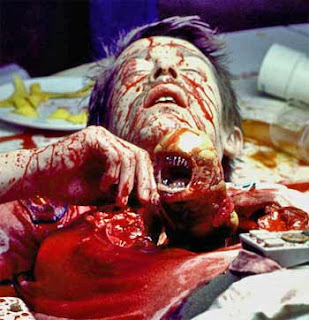 Apparently, my reaction was very similar to the members of the cast when the scene was shot. Actor John Hurt and the crew were the only ones on set that day who know what was coming. The looks on the other actors’ faces? Those are genuine. And poor Veronica Cartwright had no clue that jet of blood was aimed right at her.

3. The Blair Witch Project - I know some people hated this film and didn’t find it scary at all. But it wigged me out something fierce. After seeing this movie opening weekend I went home by myself to my then world’s smallest 1-bedroom apartment. And every little sound got a little louder. And very little shadow got a little longer. I couldn’t sleep for several nights afterward.

So what got me in this movie that other movies don’t have? The fact that you never saw what got them. There was no chainsaw-wielding maniac, no crazed killer in a hockey mask, no diabolical torturer or spawn of Satan. All you saw was what “it” left for the victims to find and what happened to the last two survivors at the end. And even THAT is unclear. 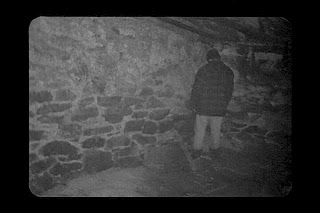 That final scene still disturbs me. Even tho I know the actors are alive and well (and “Heather” went on to shoot a few commercials for Steak ‘N Shake) I still get weirded out those last few minutes.

Now back to my first ever horror movie. My parents took me to the drive-in to see “The Sentinel,” which is one of the many ‘demonic’ movies to come out during the 70s on the tails of “The Exorcist” and “The Omen.” The movie itself is very strange with several bizarre scenes and lots of disturbing imagery, but this scene is the one that’ll get ya.

I triple dog-dare you to watch that, by yourself, in the dark, and not wet your pants.
Posted by Hollygoyle at 2:15 PM

"The Exorcist." I saw it in the theater and wanted to leave, but I was with friends and that would have been embarrassing. So I closed my eyes. I couldn't bear to watch as the camera went up the stairs toward the room. "Don't go up there," I thought. "Are you stupid? Stay out of the damn room!" But up the stairs the camera went, and into the room, and there was the girl floating above her bed, and I wanted to get up and walk out of the theater.

The first time I saw "The Sixth Sense" I was uneasy for a few days. I've seen it several more times and it no longer bothers me, but that first time . . .

The fact that you were so inspired by the scariest face of all time enough to paint it on the wall of a haunted house speaks volumes to me about how awesome you are.

That face scarred me for life.

My parents had the pleasure of seeing Exorcist on the big screen, much like your blogging buddy Stephen. My dad was 19 and my mom was 16 at the time, and they had to go back home and get their marriage certificate just to prove that they were married since my mom was underage. My parents said people were up and out of their seats quicker than you could bang a 3 dollar whore, puking everywhere. If that's not awesome I don't know what the fuck is. My dad is all about the "unedited" version. I think he secretly has a crush on little miss demon-possessed.

Alien is priceless. I was eating a pack of Red Vines when that unsuspecting scene splattered before my very eyes. I can never look at licorice the same again.

Never did get to see the Sentinel though. Looked fucking scary. I wouldn't be able to watch that bitch in the dark.

I only recently got around to seeing "The Exorcist". I found most of the scenes with Linda Blair laughable but it was the things in the shadows that totally got to me. I can imagine if I'd seen it on teh big screen how freaked out I would have been.

One that really got to me was "Carrie". I watched it in the middle of the night and the worst thing for me was the final dream scene. I have no idea how I got to sleep that night.

An odd one for your collection is a made-for-TV movie called "Crawlspace". I have no idea if you can find it. Here's the imdb link http://www.imdb.com/title/tt0066954/
A book is also available.

And from my childhood the all time scary movie for me that gave me nightmares for years was "The Four Skulls of Jonathan Drake". I saw it on TV when I was about seven. I recently discovered it's available on itunes! http://www.imdb.com/title/tt0052820/

The Exorcist never scared me. Well, the face flashing caught me off guard, so I guess that part did. I still love the way it was filmed - the lighting, music, camera angles. It was great :)

I feel the same way about Blair Witch Project as you do. It freaked the hell out of me. But again, I liked the way it was filmed.

There was no virgin dying right after sex, there were no kids getting killed after getting drunk or smoking pot - none of the typical horror movie expected scenes. The concept was a completely fresh idea.

When I was little the childrens' book version of the Headless Horseman kept me awake for about a week, so I guess I'm a pretty easily scared person :)

Evil Dead was the one that got me. Since then, I've never gone down the cellar of an abandoned shack in the middle of a forest.

In Alien, the scene where Dallas dies is the one that gets me. Only a couple of weeks ago I was watching it for what must have been the 11th or 12th time, it was after midnight, I was kinda falling asleep, not really paying attention and !!THAT SCENE!! happens and I jumped a mile. I actually shouted "AAOOWW!" out loud. Woke the wife and kid up. Had some explaining to do.