Thoughts from the Big Chair 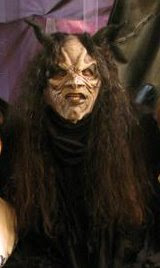 For the past few weekends I’ve been doing a lot of pondering. Well, there’s not much else to do, since I’m sitting on my big, furry ass, waiting for folks to plop down their money so they can snuggle up with me and get their photo taken to document the event.

Early in the evening you might find me reading a book, but once the crowds start showing up, I have more fun just people watching. Nicograph (our photographer) and the Spouse (managing the gift shop sales) keep me company and we all share in some good laughs at some of our observations.

But, like I said, I have some deep thoughts while I’m perched on my big bench, overlooking the crowd...

1. Normally I don’t like being stared at. It freaks me out. I’m terribly paranoid most of the time (ask the Spouse about my habit of locking doors) but when I’m made-up all horrible and ugly I don’t mind being looked at. So go ahead and stare. For 5 bucks you can take it a picture, it’ll last longer. But, really, look all you want. If you stare long enough I might wave, stand up and freak you and your pals out, or do a trick.

2. But don’t be obnoxious about it. If you come to our Haunted House and you’re being a jerk I already hate you. And I am the first wall of security in our establishment. So if you come in with a chip on shoulder or with an attitude I’ll be alerting the rest of our security to be looking for you. And we have two police officers on the premises that we’d love to introduce you to.

3. Don’t come in drunk and/or stoned either. I hate you, too. I just can’t comprehend the mentality that says, “Hey, let’s get drunk and go to a Haunted House!” You dumb ass. You just wasted money on something you either won’t remember or will get tossed out of because of your behavior. Smooth move, Exlax.

4. Another thing about the drunks and stoners... Do you realize how bad you smell? I notice these things, especially when you slam yourself next to me for a photo. I’m nearly dying from the fumes. I could easily get a buzz just from your aroma alone.

5. Yes, I AM real. Yes, I can hear you. And yes, I talk. Feel free to talk to me and ask questions. Just don’t be a putz about it. If you are polite, genuinely curious and friendly, I’ll chatter with you as long as you’re in line waiting to get into the House. But if you’re being an asshole the most you’ll get out of me is a shake of the head. I don’t communicate with morons. I refuse to have a battle of wits with an unarmed person.

6. Like I said, I AM real. And, if you ask first, you can touch me. You can touch my ‘face,’ you can shake my hand, you can feel my fur or touch my wings. (I tell ya, I haven’t had this much physical action since my younger, single gal days.) But do NOT grab me, try to pull off my ‘face’ (it’s glued onto my real face) or pinch my fingers. Some little tween girl did that last week and I wanted to kill her.

7. I am NOT ‘Jeepers Creepers.’ I started this costume years before that damn movie was released. Don’t get me wrong, I love that movie. But I am NOT the creature from that film. I barely even resemble that thing. And we don’t do famous movie characters at our House. Go somewhere else for that stuff. All of our stuff is original. Nicograph and I got so tired of hearing ‘Jeepers Creepers’ that she made me a sign last weekend that says, “I am NOT Jeepers Creepers! I am a GARGOYLE! Get it right!” I haven’t used it yet, but I may have to.

Oh, well, it could be worse. At least I’m not hearing ‘the flying monkey from The Wizard of Oz’ any more.

8. Our volunteers are wonderful. I can’t say that enough. So many of them check on me all night, making sure I’m ok and well-hydrated. These folks are bringing me soft drinks all night long. And since I’ve turned Directorship over to my protege, B, things have gone very well and I personally have been a lot less stressed. Which is a good thing. The Spouse is happy.

So one more weekend and then it’s a wrap. And I can look forward to Halloween Night in our neighborhood. And then I can take a much needed rest from spooking.

Except we have not one, not two, but THREE (yes, three) Ghostly Sleepovers in the Mansion for the first three Saturdays in November. Which means I’m pulling three all-nighters doing Tarot Card readings for our ghost-hunting guests.

Yeah, Halloween really is an all-year event for me. And I wouldn’t have it any other way.
Posted by Hollygoyle at 9:27 AM

This sounds very familiar. When I used to do haunts for charity groups I could usually spot the groups that were going to cause trouble because they always seemed to wear white baseball caps. They might as well have been wearing shirts that said "asshole" on them.

One year I had a dad put his hands all over an actor that had been playing dead. He was trying to show off his bravery to his kids I guess. He was mortified when the ghoul whipped off its mask and revealed that she was a girl (You couldn't tell with her costume). He had the actor and his wife bitching him out on either side. I didn't really have to step in at all. I just let them chew him out for a bit and then prompted them to move along so I could the traffic flowing through my haunt again.

Two years in a row I dealt with a bad volunteer at one haunt. The first year I was a new actor and she'd been there a couple years, so I couldn't do anything about her. The second year I had taken over the haunt and I had a talk with her and told her I wouldn't put up with the behavior I'd witnessed before. I gave her some guidance as to what I expected from my actors. She seemed receptive.

The first night of the haunt, she began bashing props around and breaking stuff (nothing expensive at least. I gave her a warning. Then she harassed a toddler who got scared in the maze. She was calling the tyke "cry baby" and other names as his mother escorted him out. The moment they were out the door, I shut down the haunt for a couple minutes while I evicted the volunteer from the haunt and explained to the event organizers that if they still wanted her there, they could use her in the hayride...but after hearing my story, they had escorted off the property. The haunt seemed to be nothing more than a chance for her to be antisocial and bully kids openly. Pretty sad considering she was probably in her late teens/early 20s.

I did home haunts the past 3 years. I generally had a good time with it, but last year I had to kick a kid out of my maze. The preteen had gone through at least 3 times and got rowdier with each pass through. When he began a tug of war on one of my actor's costumes I kicked him out and told him not to return. My doorman missed me doing this and let him back in once again. The kid started grabbing props and swinging them around. I escorted him out yet again and then chewed his parents out and told them that if they couldn't keep an eye on their little hoodlum they could get off my property.

Happy Halloween, eh? I've decided to just hold a Halloween party this year for people we know and not entertain the entire neighborhood. Hopefully I don't have throw anybody out this year. ;)

Have a Happy Halloween!

Preach on, Brother Tom, preach on...

Yeah, we have had our share of bad volunteers as well. People who break props and mouth off to our paying customers. And, just like at your establishment, we escort them off the property.

Ya know, we need a support group for Haunted House workers. I guess Blogger will have to do in the menatime...

I love your Halloween spirit. :)