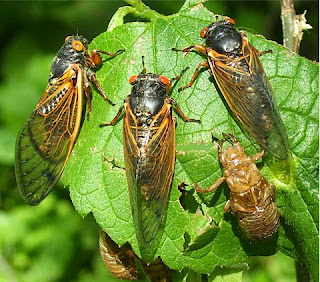 So I had this thought the other day... Dining outside is called 'dining al fresco.' Why don't we have working al fresco?

It was earlier this week, the weather was beautiful and those of us stuck in Cube Farm Hell were lamenting our being inside instead of outside. It was then the thought came to me; why CAN'T we work outside? Just move our desktops and Macs outside, set up a large patio umbrella over us and viola. Or at least have some windows that open or install some French doors or something.

But then we'd have to deal with the natives. And the natives downtown can be quiet scary.

Speaking of scary, those space-alien looking things above have invaded our area something fierce. It's still quiet in downtown Loserville but once I venture home to exotic Fern Creek the noise is deafening. Imagine an invisible Mother Ship hovering over your house all day. After being outside for only a few minutes your eardrums start to vibrate.

And there's thousands, nay, millions of them out there. There's a constant halo of bugs hovering around all the tree tops. They've been smacking into the window as I type this. It's brutal.

So the invasion has begun; They're here, they're loud and apparently, they're tasty.

But if cicadas don't do it for ya, there's always bacon.

I did surprisingly good on this. Was it because A) most of my friends are geeks or B) I know WAY too much about serial killers?

Have fun navigating, and go green at the same time.

Cat yodeling... I'm glad to know that the Spouse and I weren't the only ones doing that...

Me want!!! Especially this one.

Forget cheaper gas or a thriving economy, this is the shit America needs.

Comfort for all of us graphic designs to know that A) other designers make mistakes and B) other designs are forced to do horrible Photoshopping, too.

No matter how much you hate your job, it could always be worse. Especially when caught for two angles.
Posted by Hollygoyle at 3:36 PM

hey beautiful, hope you had a fantastic birthday.